The original vision for the UI architecture in RadGrad1 was to organize the entire UI around three top-level directories:

In addition to this top-level organization, each of these subdirectories can have separate areas to segregate components specific to RadGrad roles (student, advisor, mentor, etc.). This is because RadGrad provides different user interfaces depending upon the role. For example:

As you can see, in addition to subdirectories for roles, there can also be subdirectories for "shared" UI components that would appear in the user interfaces for more than one role. In addition, the Landing page became complicated enough to warrant its own dedicated subdirectory.

While this top-level architectural organization was mostly adhered to in RadGrad1, an emphasis on rapid protyping of new behaviors coupled with a lack of commitment to refactoring meant that the RadGrad1 code base started to accumulate a significant amount of "cloned code". As time went on, this cloned code added significant overhead to development: changing a user interface element or behavior might require finding and editing several copies of its implementation scattered among the various "role" subdirectories. Bugs could be found and removed from one copy, yet remain in other copies located elsewhere in the code base.

One of the goals of RadGrad2 was to eliminate the presence of cloned code by creating more "generic" components that could be instantiated with parameters to adapt them to various contexts within the user interface. However, this has created new problems.

A cursory inspection of the RadGrad2 user interface code base reveals a significant amount of disorganization:

In attempting to write acceptance tests, I found the current level of disorganization severe enough that I had significant problems figuring out the location of the React components used to render pages in the Student interface. That's just crazy.

The goal of this page is to document some of the issues I've discovered so far and present some recommendations for discussion.

The next section details some problems I've discovered so far, along with some proposed recommendations. Before presenting them, it seems useful to present my idea for a revised set of architectural guidelines more compatible with the nature of the RadGrad2 code base:

Now let's look at some examples of problems I've discovered in RadGrad2, along with proposed recommendations in keeping with these new architectural guidelines.

The code in description-pair-helpers.ts is imported in code located within the components/ directory, but is not used across all of layouts/, pages/, and components/, which would justify its placement at the top-level.

The layouts directory, in addition to the App.tsx file containing the global layout, now contains both a shared/ and student/ directories containin "behavioral" code (in this case, high order component implementations):

The ui/components/admin (and other) subdirectories don't have a consistent internal organization. While some components are organized into subdirectories according to the page they are located on, others aren't. This is inconsistent, and thus confusing to developers:

An example of part of the ui/components/admin subdirectory, showing both directories and files: 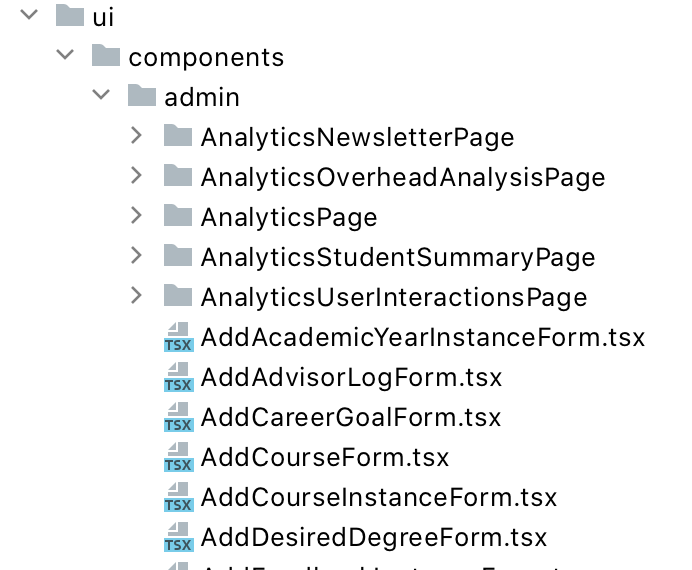 On the other hand, the ui/components/advisor subdirectory has no internal organization by page: 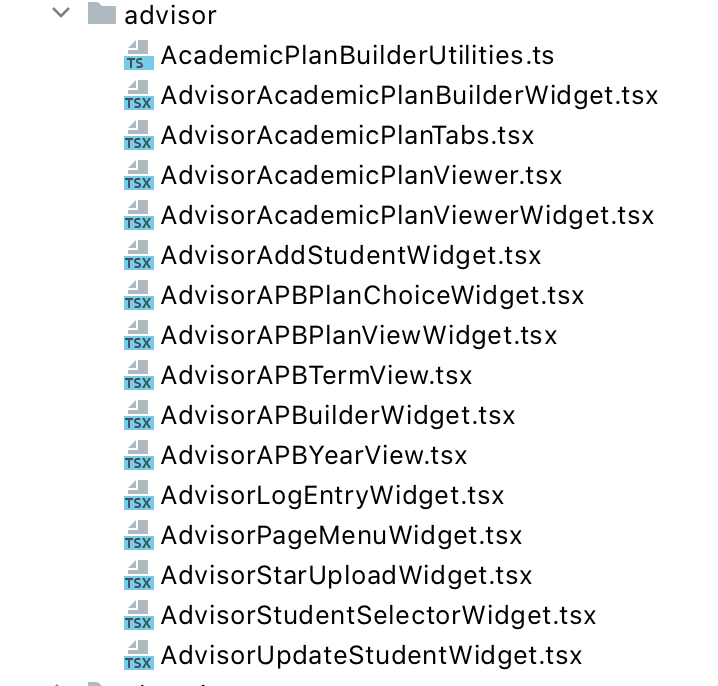 On the third hand, the ui/components/shared subdirectory goes back to a combination: 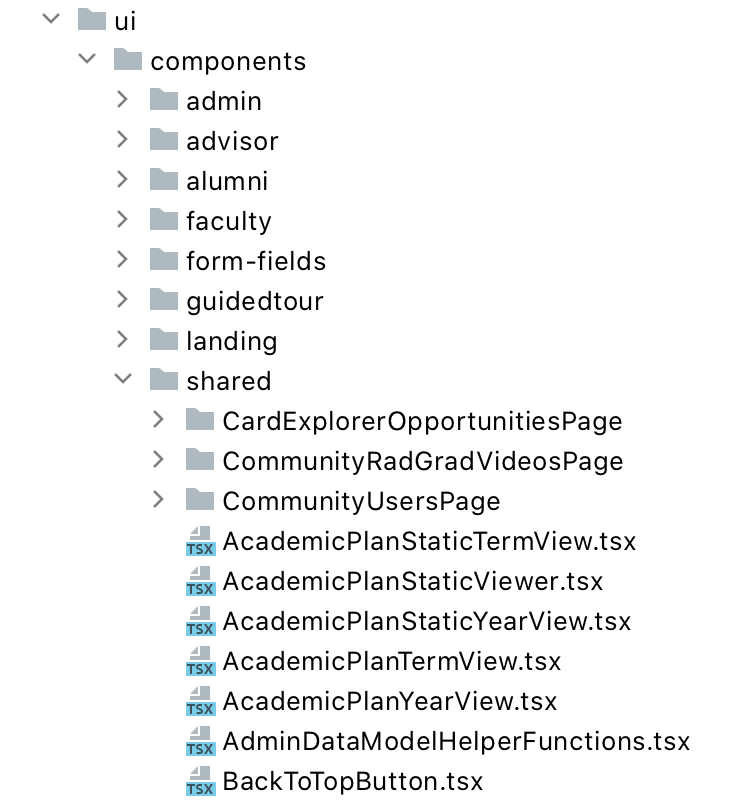 When attempting to write acceptance tests for the "Opportunities" page in the student UI, which is Hanna code, I found it very difficult to find! It turns out that is located in:

This is not a "shared" page: it is specific to the student UI.

The move to the Hanna UI means that there is now code in the ui/ directory written by Aljon that is no longer used.

7. Problem: UI code improperly labeled as "Card" when there are no cards in it.#

The previous problem used as its example a React Component called "CardExplorerOpportunitiesPage". However, it does not involve "Cards"!

(I think the use of "Card" in the component name is a holdover from the early days of RadGrad1, when we had some pages with simple tables and decided to experiment with a new, "Card"-based UI approach. Unfortunately, now everything is called a "Card" regardless of whether or not it even uses Semantic UI Cards in its implementation.)